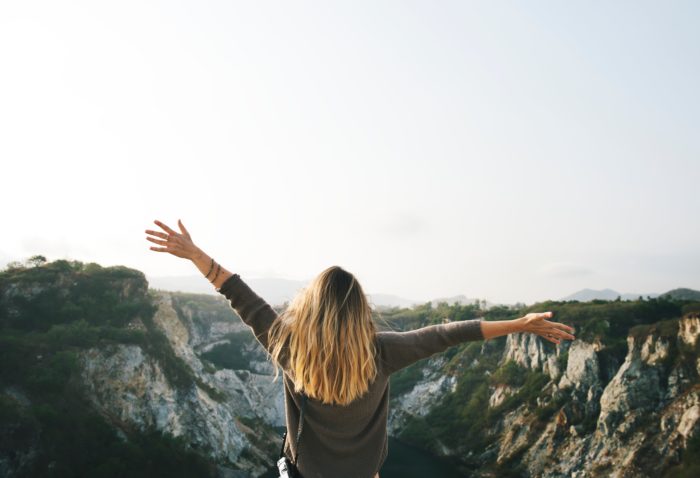 The history of 1st Step is filled with stories of hope and inspiration. The following is a story from a past 1st Step participant:

I was diagnosed with Bipolar just over two years ago. My journey began in grade 12, at which time I [was] living with a mild depression [which] lasted all winter. It wasn’t until the summer after grade 12 while on a camping trip and drinking heavily for the first time that I had a psychotic episode.

When I came home from the trip, I was not myself. I distinctly remember my parents saying that I was not the Christine who had left before the trip. I thought I could read my parents’ minds. They then brought me into the emergency room where I had a psych. assessment performed. I was admitted and in there for 10 days. It was one of the most traumatizing experiences of my life.

I went with a psychotic break and was then sedated without consent for two days. I was apparently violent, and even bit a nurse — none of which I remember. My parents weren’t even allowed to see me the first day, and I can only imagine how petrified they were. It took me a few days to regain total consciousness and some understanding of what happened. Unlike many people, I had a blast once I was more ‘with it’, because I was at my highest manic point in the hospital.

“[It was my] mother who put me in touch with 1st Step. I was assigned a case worker and a psychiatrist, and I could attend groups with other young people suffering the same thing.”

Once I was released, I saw the same psychiatrist I had seen in the hospital. I told him I heard voices, and the impression I got from him was that there was nothing wrong with me. [It was my] mother who put me in touch with 1st Step. I was assigned a case worker and a psychiatrist, and I could attend groups with other young people suffering the same thing.

The next nine months after being out of the hospital were the worst of my entire life. I was at the bottom of the barrel with severe depression. After a severe manic episode, the depression that follows is even worse. It was once explained to me that after being in overdrive for so long, you brain pretty much goes into hibernation. That’s exactly how I felt: I was tired all the time, I had difficulty concentrating, difficulty carrying on a conversation, and I thought about suicide a lot (never having attempted). It felt like a huge weight was pressing down on my shoulders from above at all times.

I have learned that my bipolar symptoms directly coincide with the seasons. During the winter I am depressed, and by the time spring rolls around I am starting to come out of it. The main thing that kept me going through that year was the fact that I had a job at a coffee shop. Meeting with my case worker on a daily basis also helped me to get through everything.

“I love sharing my story with people […] Each time I tell it, I think I grow a little more.”

It has been two years since my diagnosis, and I am getting along swimmingly. I am in my second year at the University of Waterloo, studying Geography. I am pleased to report I have had no episodes of mania or depression. The only time I even think about my illness is when I go to take my Lithium before bed. I would never stop taking it, no matter how good I feel, because I know that it what is keeping me stable.

Mental illness is not curable, but it is very much so controllable, and I am living proof. I love sharing my story with people; it was a very traumatizing time in my life, and each time I tell it, I think I grow a little more. I feel that since I have been through what seemed like hell, I have developed an increased ability to show empathy towards others, regardless of what their trials may be. I am also spiritual and God played a huge role is helping me find peace and meaning. My faith in God and life helped me get my feet back on the ground.

I hope that my short story here will help someone living in darkness to realize that it won’t last forever, and there is a light at the end of this thing called “mental illness”.